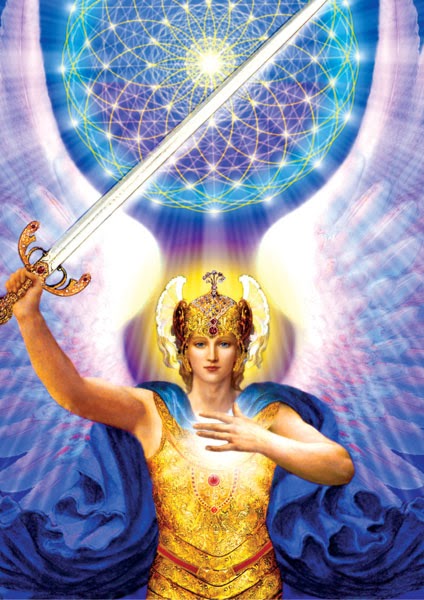 In the New Testament Michael leads God’s armies against Satan’s forces in the Book of Revelation, where during the war in heaven he defeats Satan. In the Epistle of Jude Michael is specifically referred to as “the archangel Michael“. In Hebrew the name of the Archangel Michael means “The one who is like God”. He is the one we invoke to support us in our fight against evil forces. He is the one who helps us to discover the light inside us.

Michael is a Celestial Angelic Being and considered a leader within the Angelic Order known as the Archangels.  Archangels are responsible for ministering to humans, considered somewhat like “manager angels,” Archangels oversee the responsibilities of Guardian Angels and the other Celestial Light Beings that act as our guardians and guides.

Each Archangel has specific qualities that distinguish their characteristics and their specific angelic responsibilities.  Archangel Michael is widely considered the archangel of protection and courage and he is often considered a patron of police officers and a patron of those within the military services.

Michael is also considered a mentor to those whose life purpose involves “light work,” guiding and supporting those whose work involves raising the vibration of the collective consciousness through the rediscovery and remembrance of our Divine Truth.

You were born on a Sunday. Your special archangel is Michael, whose name means “he who is like God.”

Some of Michael’s special areas of angelic assistance include discovering and implementing our life purpose, direction on our life path, empowerment, motivation and focus.

While Archangel Michael is probably first and foremost associated with Protection and secondly with Life Purpose, this awesome Archangel is all that and a whole lot more! Michael is known for assisting with all forms of healing, including physical healing as well as supporting and facilitating energetic detoxification, cleansing and healing and raising our energetic vibration. Archangel Michael is also known for his tremendous ability to comfort, support and lift us back up when we are down, feeling defeated and when we are experiencing any form of grief.  Archangel Michael helps us to remember our inner power, remember our True Self and supports us to return to our natural and true state of empowered grace.

Title: Archangel of Patience; Leader of the Army of God; Prince of the Archangels; Warrior Archangel

Ask Archangel Michael for spiritual and physical protection from crime, accidents or aggression. Summon him when challenges in your life seem overwhelming. He is committed to you and your spiritual growth. Open your heart so that his great power and strength will protect you. One of his greatest gifts is that he bestows on your inner peace, love and beauty.

Affirmation: “I am committed to all that God intends for me.”

Force idea: I live my life with integrity, fighting for truth and justice.

Symbolism: Archangel Michael is the fighter of light par excellence, who succeeds against the darkness of evil forces. In his icons, he holds a balance that weighs people’s deeds on Judgement Day, as well as a sword, with the help of which he defeats Satan and the forces of darkness. Often he is represented defeating a dragon.

Angelic function: Leader of the Army of Heaven

Spiritual gifts that he offers us: He strengthens our souls and sustains us in the fight against evil forces, whether they are exterior aspects or negative aspects and tendencies that still exist in our being; he sustains us when we are alone.

Historically, he is considered the protector of Israel and of the Catholic Church. He is the holy patron saint of police and soldiers, but also of little children, and it is said that he watches over travelers and foreigners. He is a fearful fighter, Prince of the Armies, fighting for justice and helping those who face difficult situations. In the same time, Michael is the one who gives patience and happiness.

While Michael is strongly associated with physical protection – protecting us from physical harm, combining Archangel Michael’s attributes as protector and healer, Michael lends tremendous support in clearing, healing and raising our energetic vibration. He helps protect us from negative entities, earth bound spirits, negative thought forms and all forms of lower vibrating energy.  This includes protecting us from our own fear based thoughts and fear based beliefs that are derived from the illusions of separateness, lack and limitation, ego lower self, unworthiness and all forms of fear.  Transcending our own fear based thoughts and beliefs is the primary step, and as previously mentioned, Michael’s mission is to help us remember our truth, remember our oneness with the Divine Universal Source. Protecting us energetically, Michael will lend his powerful presence to ward off lower vibrating, negative energy/entities etc. and will assist us in clearing and shielding our own energy fields. When called upon for protection, any form of protection, Michael will be present immediately, lending his support in this capacity. Strongly associated with courage, Archangel Michael infuses us with the courage to realize our dreams and to fulfill our Life Purpose. Yes Michael is most typically associated with bringing courage to soldiers on the battlefield, police officers, fire-fighters and courage to those in all forms of dangerous occupations. However, he will also bring courage to those who need courage just to face the day, courage for a job interview, courage to make a presentation, courage to face and heal addictions.

The subtle element of fire is associated with him. This symbolizes the burning of everything that is transient, so that only the pure essential light remains and shines. He is also called the Benevolent Angel of Death, because he leads us towards immortality, being in the same time the one who “weighs” the souls in the Judgement day, putting their good and bad deeds in balance.

The Judaic, Christian and Islamic tradition, all consider Michael as being the greatest of the angels. He is known also as the Carrier of the Heavens’ Keys, the Archangels’ Leader, Angel of Repentance, Pity and Holiness, Prince of the Divine Presence, Jacob’s Guardian, and the Angel of the burning bush. Archangel Michael is the Archangel of the South, and rules over the element of Fire. Archangel Michael vibrates to the energies and powers of faith, truth and protection.He never tires of fighting for good and he always helps the humble ones. Michael inspires those who struggle in loneliness and he is always ready to give a helping hand to the one in trouble or suffering.Michael means “Who is like God?” Other spellings of Michael’s name include Mikhael, Mikael, Mikail, and Mikhail. Archangel Michael (also known as Saint Michael) is God’s top angel, leading all of the angels in heaven. Michael’s main characteristics are exceptional strength and courage. Michael fights for good to prevail over evil and empowers believers to set their faith in God on fire with passion. He protects and defends people who love God. People sometimes ask for Michael’s help to: gain the courage they need to overcome their fears, obtain strength to resist temptations to sin and instead do what’s right, and stay safe in dangerous situations. Archangel Michael is the only angel who is mentioned by name in all three of the major sacred texts of the world’s religions that place the most emphasis on angels: the Torah (Judaism), the Bible (Christianity), and the Qur’an (Islam). In all of those faiths, believers consider Michael a leading angel who fights evil with the power of good. Michael is an exceptionally strong angel who protects and defends people who love God. He is powerfully concerned about truth and justice. Believers say that Michael communicates boldly with people when he helps and guides them.

We can ask Archangel Michael to help us control and overcome the negative tendencies that still exist in our being. Anytime we feel overwhelmed by events, or when life situations seem to develop relentlessly, he can help us have a more elevated, more spiritual and wiser view upon our life. His mission is to guide and protect us from injustice and to help us open our beings towards what is eternal and immortal. We can ask him to help us in any situation when we feel overwhelmed or alone and we need help.